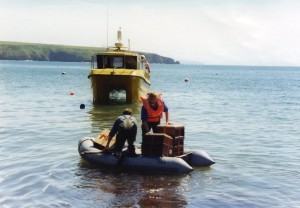 Bardsey Island, or Ynys Enlli, sits a couple of miles off the tip of the Lleyn Peninsula in North West Wales. It is a hidden gem of a place, guarded by the strongest tidal streams along the Welsh coast. It is both a National Nature Reserve and a Site of Special Scientific Interest; home to the world’s rarest apple, a large colony of Atlantic grey seals and 15,000 Manx Shearwaters, to mention but a few of its interesting inhabitants.

Having visited the island several times over the last few years I began to think of what an excellent place it would be to have a couple of bee hives.  According to one of the residents bees had been kept on the island by the farmer approx. 50 years ago with mixed success.
Having obtained all the relevant permissions, I took two hives out to the island during the May half term break this year (2005).  It was a relatively calm crossing in the small passenger ferry, much to the relief of all, though getting the hives across to the ferry in the inflatable rowing boat was more of a challenge.

Hive transport along the island’s only track comprised a combination of wheelbarrow, then quad type vehicle, before the bees arrived at their final destination behind the bird observatory. 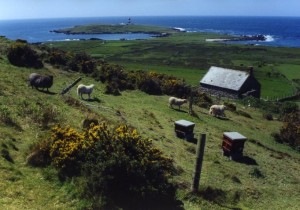 Within one hour of letting the bees out of the hives they were spotted half a mile away already foraging on a patch of pink thrift.  This salt tolerant plant covers most of the south end of the island and together with the tiny blue squill forms the main spring forage for the bees.  Other bee flowers present on the island include blackberry, gorse, clover, thistle, and heather. 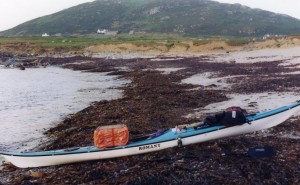 The project has been made more viable due to the fact that I am a keen sea canoeist and have therefore been able to canoe out to the island at fairly regular intervals to manage the bees without the expense of the ferry.  However, canoeing across to the island with a brood box on the back of the kayak to deal with a swarm, proved to be quite a challenge!  In fact to date, I have not yet found that swarm.  Would bees really fly over 2 miles of open water to find a new home?

I left the bees well roped down against the wind and the sheep. I intended to make my last trip of the year out to Bardsey in September / October in order to extract whatever honey I could and to ensure that the bees were in a reasonable state to over-winter there.  I had been keen to get out to the bees to extract any honey that they may have had, but as there is a good amount of heather on the mountain there, I wanted to leave them until as late as I could. However, every time I was available to go across, the weather was not going to allow the journey. I was hoping to make a weekend of it and also to take my family and extracting equipment on Colin’s boat. Some of the islanders would be very interested in seeing the extracting process, but in the end I had to make do with a quick solo kayak trip to take advantage of a window of calm weather.So finally, on a frosty morning in late November I kayaked out from Aberdarron at 7:00 a.m. in the semi-darkness, wondering at the wisdom of such an inaccessible out-apiary! Would there be any honey? Would it all have set hard by now? How was I going to get it in the kayak? Such questions soon became secondary as the awesome spectacle of Bardsey Island came into sight, lit up by the glow of the approaching sunrise.Once at the hives, I worked as gently as I could and managed to remove 21 frames with honey on them, brushing a few bees off here and there. The next stage was to wrap each frame in a plastic bag (thank you Mr. Tesco) and then to carry the whole lot in a large hold-all back to the kayak (half a mile away). The biggest challenge was to then pack all the frames into the kayak, doing as little damage to them as possible. I eventually managed this and paddled back to Aberdarron with my precious cargo… although my kayak has never been so sticky!I will not try that particular method again, as a lot of honey ended up on the bags, the hold-all, the kayak… in fact just about everywhere by the time I got back home! Despite this though, I finally managed to extract 30lbs of Bardsey honey from what was a small colony in May… a satisfactory outcome for the bees’ first year on Ynys Enlli.

This site uses Akismet to reduce spam. Learn how your comment data is processed.

We use cookies on our website to give you the most relevant experience by remembering your preferences and repeat visits. By clicking “Accept All”, you consent to the use of ALL the cookies. However, you may visit "Cookie Settings" to provide a controlled consent.
Cookie SettingsAccept All
Manage consent

This website uses cookies to improve your experience while you navigate through the website. Out of these cookies, the cookies that are categorized as necessary are stored on your browser as they are essential for the working of basic functionalities of the website. We also use third-party cookies that help us analyze and understand how you use this website. These cookies will be stored in your browser only with your consent. You also have the option to opt-out of these cookies. But opting out of some of these cookies may have an effect on your browsing experience.
Necessary Always Enabled
Necessary cookies are absolutely essential for the website to function properly. This category only includes cookies that ensures basic functionalities and security features of the website. These cookies do not store any personal information.
Non-necessary
Any cookies that may not be particularly necessary for the website to function and is used specifically to collect user personal data via analytics, ads, other embedded contents are termed as non-necessary cookies. It is mandatory to procure user consent prior to running these cookies on your website.
SAVE & ACCEPT
Loading Comments...